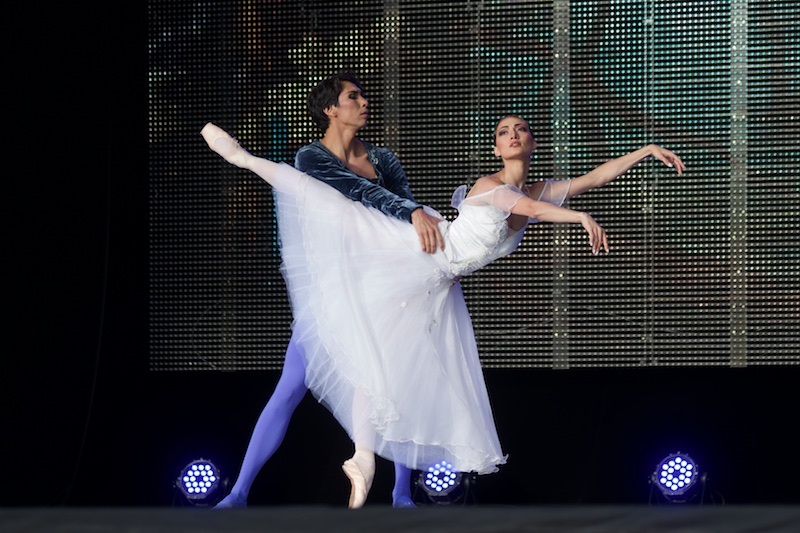 NUR-SULTAN. KAZINFORM – On July 5, a unique gala ballet program, featuring world classical masterpieces and works by outstanding choreographers of the 20th and 21st centuries, was presented to the Lithuanian audience by the Astana Opera Ballet Company. Thousands of tourists and city residents, who gathered in an open space near the famous Kaunas Castle, expressed their appreciation and joy with thunderous ovations and cries of “bravo”, informs the office of Astana Opera Press.

The oldest brick castle in Lithuania, built in the middle of the 14th century at the confluence of the Nemunas and Neris rivers, served as the picturesque setting for this fantastic ballet. In the second part of the concert, Anastasia Zaklinskaya skillfully transformed into the oriental beauty Zobeide from the ballet Scheherazade by Michel Fokine to the music of Nikolai Rimsky-Korsakov. Ballet soloist Serik Nakyspekov performed the role of the Golden Slave. 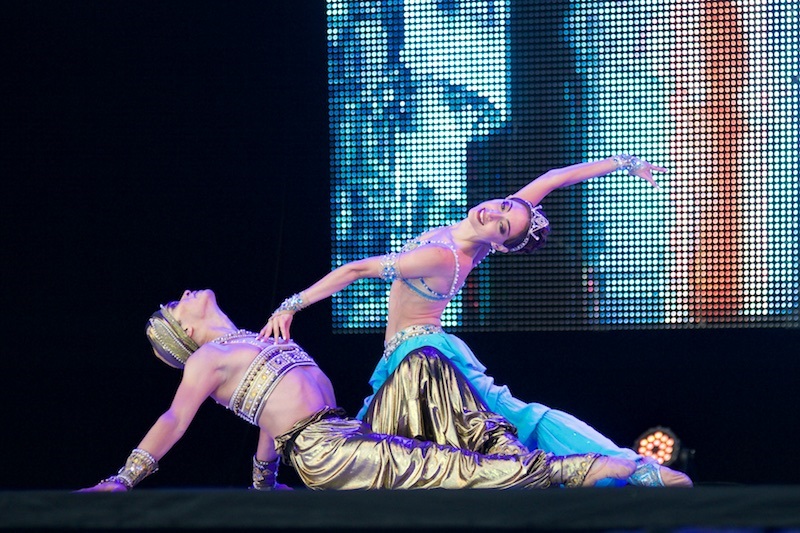 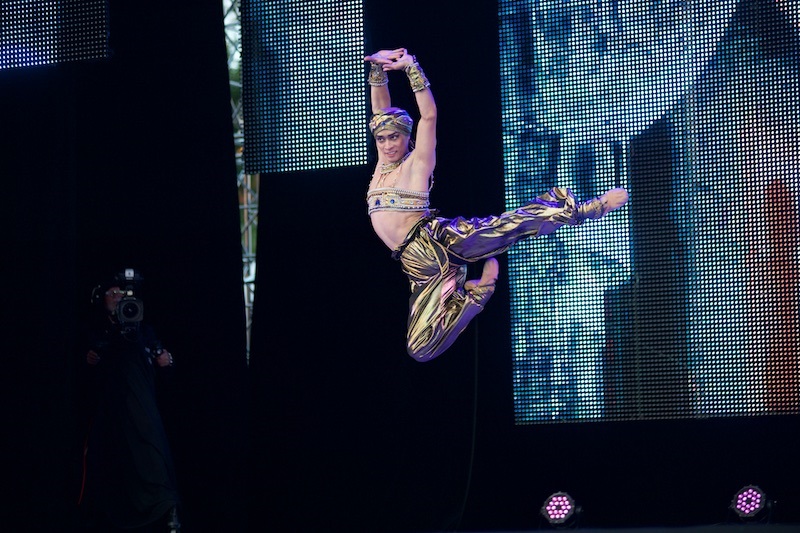 After the tender Giselle, the passionate gypsy Carmen appeared on stage. A duet from the eponymous ballet by the eminent 20th century choreographer Roland Petit to music by Georges Bizet was presented to the Lithuanian public. The expressive play and sensual plasticity of the distinguished workers of Kazakhstan Gaukhar Ussina and Rustem Seitbekov did not leave anyone indifferent. 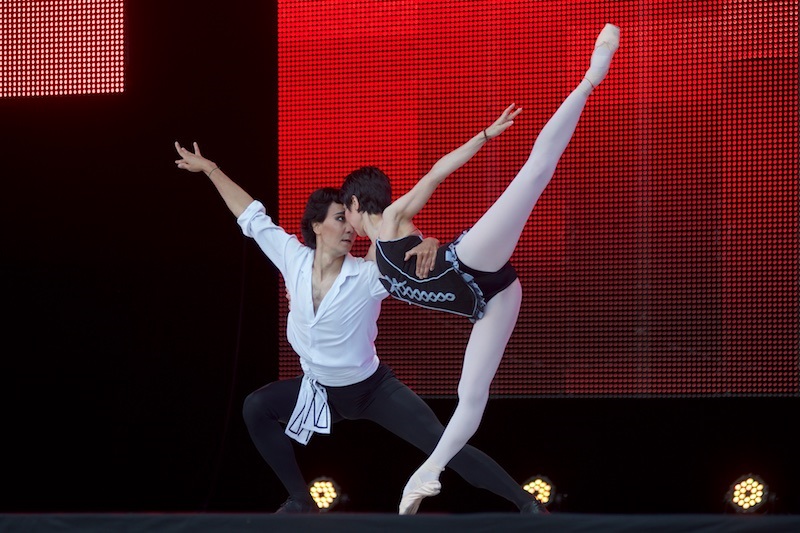 A fascinating story filled with ancient magic, where myth and today’s reality intertwine, was presented by a duet from the ballet “Sounds of Time” by Kazakh composer Aktoty Raimkulova, directed by Swiss choreographer Ksenia Zvereva . Honored workers of Kazakhstan Anel Rustemova and Olzhas Tarlanov performed as heroes with mysterious power, who found themselves in incredible events.
Examples of the creative work of modern domestic and foreign authors also included numbers: Tamyr by Kuat Shildebayev choreographed by Anvara Sadykova, Lost Paradise by Ksenia Zvereva to music by John Williams. 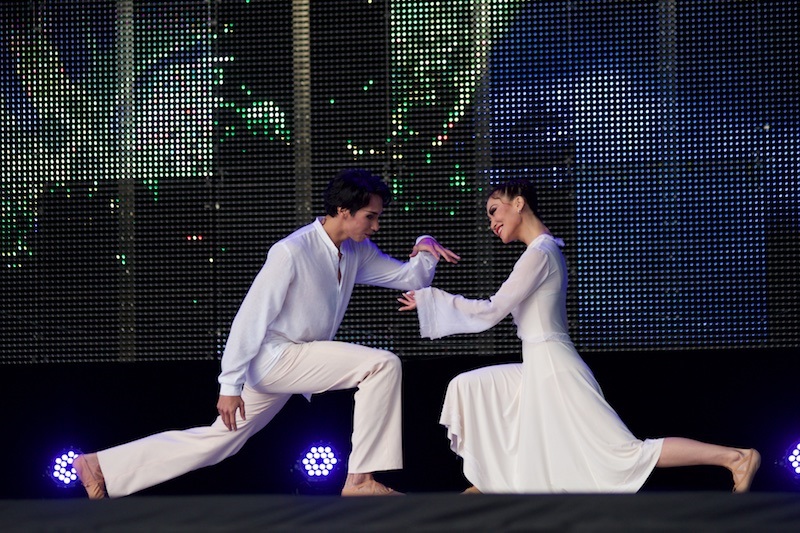 The festive atmosphere permeated all around; the dancers pulled out all the stops, delighting the people of Kaunas with the performance of Ludwig Minkus’ Indian Dance from La Bayadère, Gypsy Dance (revised by Elena Sherstneva) from Don Quichotte, pas de deux from 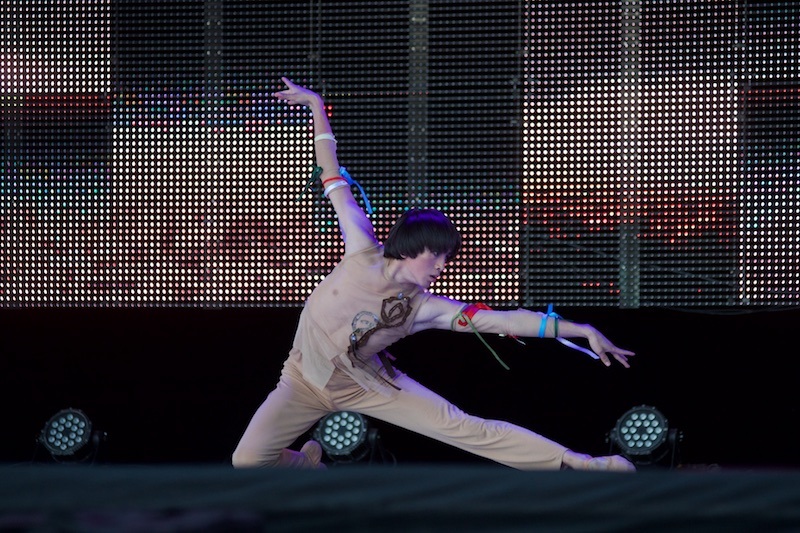 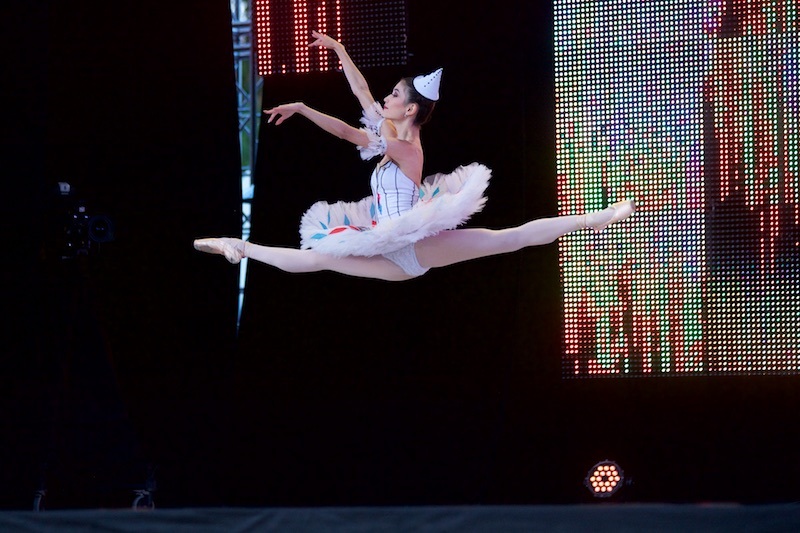 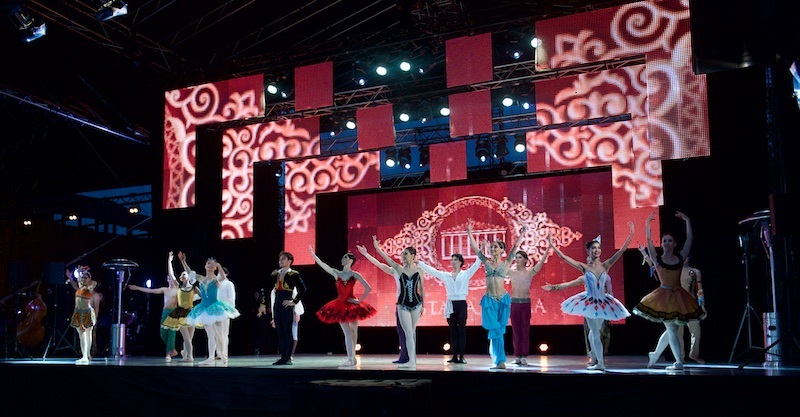 The performance of the Stars of the Astana Opera Ballet Company Honored Workers of Kazakhstan Aigerim Beketayeva and Bakhtiyar Adamzhan aroused special admiration from the audience. The Principals performed a duet from the famous 20th century ballet Notre-Dame de Paris directed by Roland Petit to music by Maurice Jarre. The exquisite beauty, sincerity, grace and playfulness of Esmeralda by Aigerim Beketayeva touched hearts, the ballerina “shone” in this difficult part, demonstrating brilliant artistic temperament, professional expertise and the highest level of technical skills.

Described as “ideal” by international experts and critics, Bakhtiyar Adamzhan’s interpretation of the immensely complicated plasticity of the deformed body and the angelic purity of the soul of the crippled soner Quasimodo has met with resounding success with the public. The power and energy of the dance, aerial leaps, impeccable technique and unparalleled acting skills of the principal dancers have won over ballet lovers from many countries around the world. Kaunas was no exception: Lithuanian connoisseurs of choreographic art joined the ranks of admirers of the talent of Kazakh dancers. Don Quixote’s Grand Pas by Ludwig Minkus performed by world ballet stars Aigerim Beketayeva and Bakhtiyar Adamzhan became an enchanting conclusion to the evening. 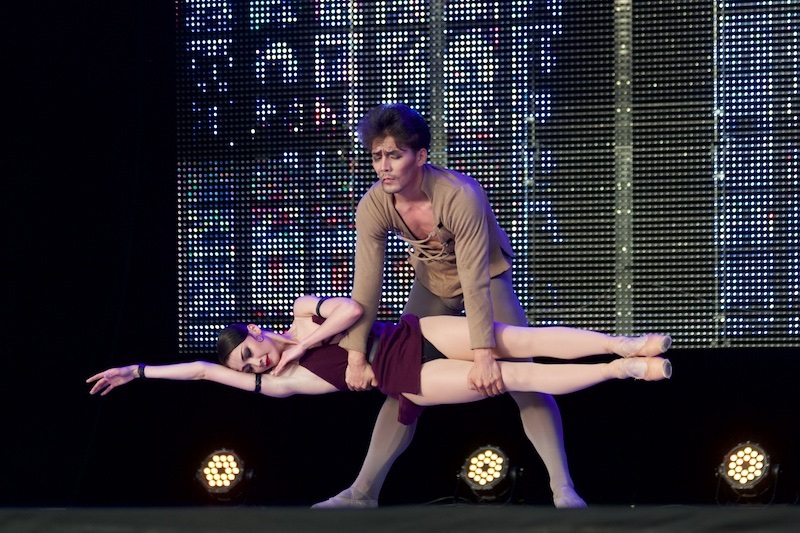 According to the audience, the performance of the Kazakh Ballet Company was a true celebration of classical art and a great gift for residents and guests of Kaunas.

“The performers showed us a great culture of dance, technical and acting skills. The professionalism of the dancers is beyond praise. It is obvious that each of them has brilliant individuality, artistic charisma and his own personal style.The lines of the ballerinas’ arms and legs were flawless; it was like poetry in motion. The company is unquestionably in great shape. I would also like to highlight the variety of genres and the contrast of numbers in the interesting, rich and well-thought-out concert program. I liked everything: the classical ballets like the contemporary numbers, it was a really impressive show! I hope today’s performance in Kaunas will be far from the last,” said viewer Agnė Raude.

The tour of Astana Opera Ballet Company in Kaunas was organized with the support of the Ministry of Culture and Sports of the Republic of Kazakhstan under the “Rukhani Zhangyru” program. 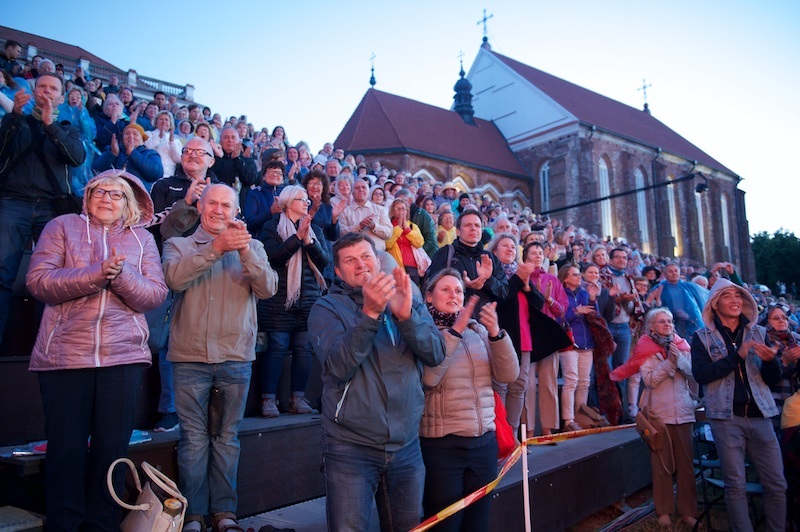 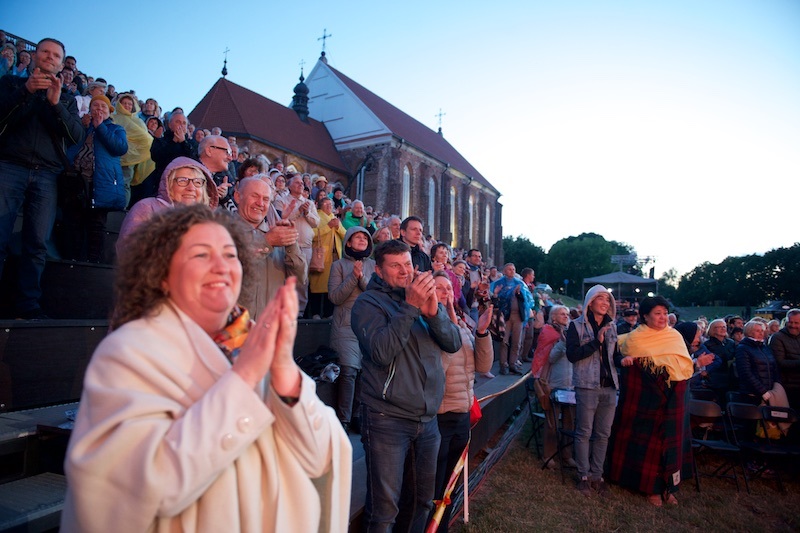 Last Wednesday, the Paris Opera Ballet held its annual opening gala virtually, as is done these days. The event was initially private, broadcast by the ballet’s guest patrons, but is now online and accessible to everyone. Like all other ballet companies in the world, the Paris Opera Ballet did not dance its regular seasons. Out […]

Roxana’s Song is the fourth creation that Opera Ballet Vlaanderen presents as part of the Imagination is Alive campaign. Krystian Lada was partly inspired by the opera Król Roger, in which the confrontation between man and nature is a central theme. Composer Kasia Glowicka wrote a new orchestration for the music. The video is online […]

What defines the Dutch school of ballet is not centuries of history or a distinctive training style, but an enviable choreographic lineage. Born in the 20th century with artists like Hans van Manen, it has been wisely supported in recent years by the Dutch National Ballet, which celebrates it this winter with “Made in Amsterdam”. […]